If you loved Technology in the Ancient World or The Mummies of Urumchi, you will enjoy Women’s Work, The First 20,000 Years. Elizabeth W. Barber tells the story of textiles as a branch of anthropology that she helped launch.

Clothing, like architecture, presents a first line of defense against the elements. And then it acquires meaning and symbol.

So much of what we use and experience each day can be taken for granted. Traditional history and prehistory trace a line narrative stringing together accounts of great deeds and interpreting durable remnants of peoples past. Buildings, engineering, coins present hard evidence. But, just as in our present time, the social infrastructure that made those deeds and monuments possible was made up of the perishable goods and services in people’s everyday lives. Food preparation, child rearing, textiles, or nursing leave few and ephemeral physical traces.

By studying the scant evidence of fabrics and looms together with depictions of the work and descriptions in texts (such as in the Odyssey), Barber weaves a complex and engrossing tale of that essential craft that shaped our world. 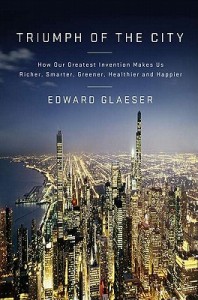 Fastforward to the 21st century’s Triumph of the City by Edward Glaeser. Architect-type friends have mostly raved about this book. The subtitle seems promising: “How Our Greatest Invention Makes Us Richer, Smarter, Greener, Healthier and Happier” (author’s caps). Ed is an urban economist. Great! I think that’s exactly who should be looking at the complexity that is a city. I am cautiously optimistic. I’m into the first few chapters right now.

Hopefully the author won’t fall into the trap that has become standard in the expostulations about urban life. These usually decline into taking sides for or against cities versus suburbs. If you love one you must hate the other, the argument goes. So far Glaeser alludes to the silliness of such discussions. But he slides a little into that abyss by slicing and selecting the data. In demonstrating how the concentration of people in cities magnifies their collective intellectual potential, he recounts that in the middle ages the centers of knowledge were in the few largest cities. Did he ever hear about monasteries? Those were exurban enclaves, for sure. But many were the centers of intellectual activity. Just like Silicon Valley. To Ed, Silicon Valley has produced such talent because of its city-like qualities, not its monastic qualities (founded far from a city to attract focused, like-minded individuals). Hmmm. Trap?

Anyway, I really hope that an urban economist can be objective and look at the macro scale of the problem. To me, that includes the city with its many surrounding smaller towns and suburbs. Dear Mr. Glaeser, please discuss:

I can’t wait to see if the economist puts numbers to these items.